Junior Leagues the world over are known for their cookbooks, and Junior League of St. Louis is no exception. 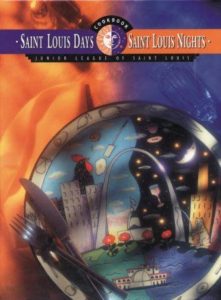 Since its humble beginning as a French fur-trapping outpost more than 300 years ago, the City of St. Louis has attracted people with wonderfully rich ethnic traditions. Influenced by this diversity, St. Louis cuisine is unique in ways not seen in other areas of the country. Saint Louis Days, Saint Louis Nights, JLSL’s cookbook, celebrates this rich heritage with recipes as diverse as a St. Louis gooey butter cake and “Flamingo Surprise” to lowfat gazpacho and “Show Me” guacamole.  One member says “I will make any recipe from this cookbook for the first time and serve it to company”.

In print since 1994, more than 55,000 copies of Saint Louis Days, Saint Louis Nights are in circulation. You can find your own copy at:

If you would like to carry Saint Louis Days, Saint Louis Nights cookbooks in your business, please contact cookbook@jlsl.org.

For wholesale or cookbook swap inquiries from other Leagues, please contact  cookbook@jlsl.org.

Junior League of St. Louis (JLSL) is an organization of women committed to promoting voluntarism, developing the potential of women, and improving the community through the effective action and leadership of trained volunteers. Its purpose is exclusively educational and charitable.

By continuing to use the site, you agree to the use of cookies. more information